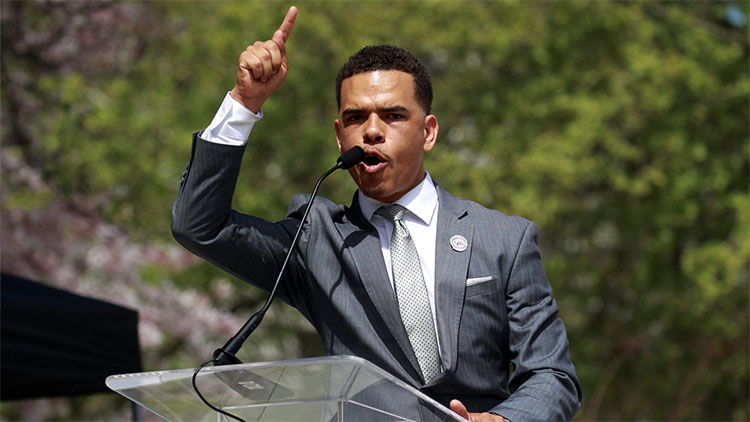 Rev. Shane Harris, a San Diego civil rights activist, is part of a group of clergy who have rallied in support of migrant families being detained at the southern border. Harris staged a protest outside the Otay Mesa Detention Center on Friday. He will conduct a tour of the facility on Wednesday.

Migrants have been coming to the United States, fleeing poverty and violence, for several decades, but the Trump administration recently instituted a new policy that separated parents from their children. About 3,000 families have been affected so far.

Former Immigration and Naturalization Service INS which is now known as ICE agent Damon Alexander said this is not a new issue. He saw the same situation when he was working for the agency in the 1990s. In those days, people were fleeing political violence in Honduras.

“Back then it was the death squads,” he said.

What’s different is the amount of media attention. Alexander also pointed out that if you are fleeing violence you can apply for political asylum, but that depends on the criteria of the country, the attorney general at the time and the president.

Alexander emphasized that it was a crime to enter the country without using legal means. If you do so, you are subject to arrest and could be separated from children, like American citizens who break the law, he said. However, he was surprised that deported migrants were not kept with their children.

According to Harris, this is a moral issue. He said the policy of separating children from their parents was not “biblical.”

“It is biblically and morally wrong,” said Harris.

Attorney General Jeff Sessions, who spoke forcibly for family separation, has been criticized by his own United Methodist Church, who has accused him of aiding “child abuse.”

Although the Trump administration has backed down and said it would reunite the families, it hasn’t said how and when it would do this.

Many Americans have been shocked at the administration’s family separation policy, but this isn’t the first time this has happened. In the past, enslaved Africans were sold as property and torn from their children. And during the early part of the 20th century Native Americans children were taken from their families, and placed with white families who gave them Anglo names and forbade them from speaking their languages. (This process was supposed to help them better integrate into society.)

During World War II, Japanese American families were interned in prison camps, because the nation questioned their loyalty. Also, the War on Drugs, which is still on going, separated thousands of black men and women from their children.

“This administration is rewinding the clock,” he said. “We should stand with them (migrants.)”

Harris thinks Trump implemented the policy because he saw it as an issue Republicans could run on in the 2018 midterm elections. And it seems to be working with hard-core Trump supporters. The New York Times reported 90 percent of Republicans to have a favorable view of Trump.

According to Harris, this can serve as a lesson for liberal Democrats.