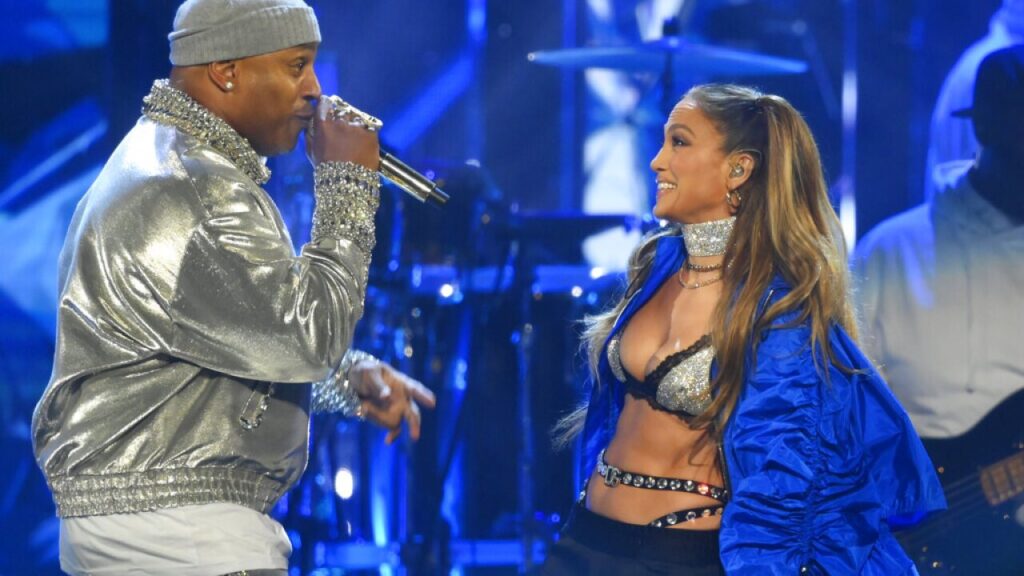 LL started off his set with a bang, going into 1987’s “Go Cut Creator Go,” from Bigger and Deffer. Sporting an all-silver iridescent jumpsuit with silver sparkle accents on the cuffs and neck, as well as a gray knit hat and sunglasses, he darted and jumped on the stage like a prizefighter. LL was clearly fired up to be performing, channeling the hunger and passion of his younger, Eighties self as he rapped.

After a bit of 1988’s “Going Back to Cali,” surprise guest Eminem nonchalantly walked onstage. What ensued was a positively incendiary collaboration on “Rock the Bells.” Eminem and LL dueted like they were in a rap battle, trading lyrics on the song with no-holds-barred ferocity; it was clear they were each pushing the other to perform better, faster, more.

After a bit of “I’m Bad” came another one of the night’s surprises: Jennifer Lopez strutted on stage for the duo’s sinewy 2003 No. 1 single “All I Have.” Wearing black pants, a bra top with silvery accents, and a blue jacket (and matching fingernails), she and LL playfully and flirtatiously sang together, representing well for the rapper’s R&B-influenced side.

LL’s performance closed with an equally fiery “Mama Said Knock You Out.” Figures wearing white hoodies appeared on the arena floor, dancing in the aisles of the floor around tables of inductees and audience members, before heading to the stage to mimic the music video’s fighter theme.

By this time, LL was clearly on another level — more than confirming that his induction was long, long overdue. Incredibly, however, he had been nominated for the Rock & Roll Hall of Fame six previous times before finally earning the nod in 2021.