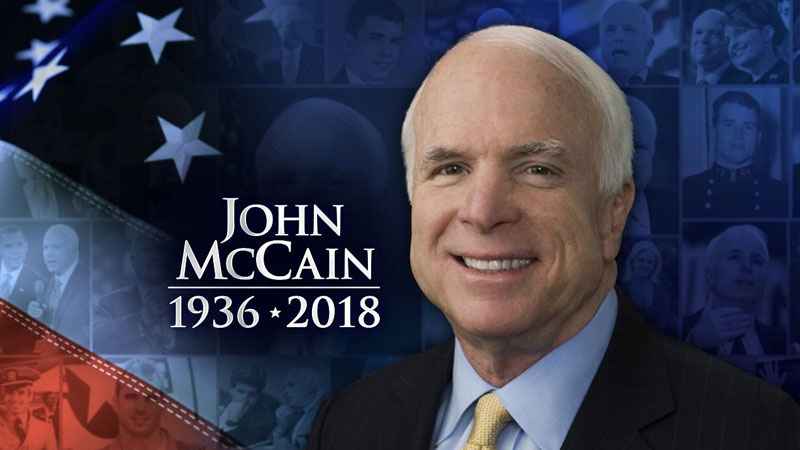 The news is currently filled with stories about the life of the late Sen. John McCain (R-Arizona.) McCain was involved with several major events of the last 50 years, such as the Vietnam War, where he was a POW, and his 2008 presidential campaign, which he lost to the first black president, Barack Obama. However, some Facebook posts by black people are questioning the adulation being heaped on McCain. One read “Name one thing John McCain did for black people?” Another post said, “Just trying to figure out what was his major contribution to the black community?”

While McCain had a mixed record on racial issues such as not initially supporting the Martin Luther King Jr. Holiday, supporters and news reports have been sharing a rare moment during a campaign event when McCain defended then-candidate Obama from a racist voter at a Minnesota town hall who had heard “he was an Arab.”

McCain grabbed the microphone from her and said. “No, ma’am, he’s a decent family man and citizen that I just happen to have disagreements with on fundamental issues, and that’s what the campaign’s all about. He’s not an Arab.”

McCain and former Sen. Harry Reid (D-Nevada) were also among the first legislators to call for an official pardon for former heavyweight champion Jack Johnson, who was arrested for dating white women. (Trump eventually pardoned him.) And McCain later admitted that he was wrong on the MLK vote.

During his political career, McCain developed a reputation as a maverick, because he did not always follow party-line votes. According to the National Journal, McCain’s voting record was 60 percent conservative and 40 percent liberal.

However, McCain’s maverick streak saved health care for millions of Americans. President Donald Trump made it his mission to repeal Obama’s signature legislation, the Affordable Health Care Act also known as Obamacare. However, the Republicans latest attempt to overturn it stalled the summer of 2017 because McCain voted with the Democrats. According to CNN, McCain voted against the Republicans’ repeal effort because he didn’t think the process was following the correct procedures. (McCain also collaborated with the Democrats to improve veteran’s healthcare.)

McCain’s decision means millions of Californians still get to keep their health care through Covered California (California’s version of Obamacare.) According to Dr. Angelo Williams, deputy director of the California Black Health Network, in 2014 Covered California enrolled about 1.4 million people.

Williams said McCain deserves some credit for going against his party to save Obamacare.

“African Americans suffer disproportionately from high blood pressure and type 2 diabetes, a dyad of diseases where prevention matters. High blood pressure can be a precursor to heart disease, one of the top killers of Black women. John McCain’s vote may have saved a Black woman’s life. That matters to Black people,” said Williams in an op-ed.

Hank Hendrix, state commander of the National Association of Black Veterans, said many veterans were also appreciative of McCain’s vote on Obamacare.

He said that since so many rules have been changed in the veterans’ benefits system, a lot of military families have had to rely on Obamacare to pick up the slack when it comes to healthcare.

Hendrix added that while veterans can receive health care through the Veterans Administration (VA) hospitals, this doesn’t apply to their families unless you’ve served for 20 years.

“The families are not covered,” he said. “This puts veterans in a precarious position.”
“We certainly recognize what he (McCain) did to prevent the repeal of Obamacare,” said Hendrix.
Hendrix said that McCain will be among those recognized at a ceremony to honor the death of black sailor Seaman Lakiba Nicole Palmer, who was killed on the USS Cole during a 2000 terrorist attack. The event will be held on the U.S.S. Midway (in San Diego) in October.