“ARE YOU HAVING FUN?” the attendant at the National Museum of African American Music (NMAAM) asked as he swooped by, genuine concern in his voice. I was admittedly concentrating—hard—at the “Let’s Make a Hit” interactive booth. “You be the producer!” said the directions underneath. “What’s your style?” I picked a funk-heavy beat, then layered female vocals. “Your production style is Philly Soul!” It declared, spitting out my tune, which I could then save to the RFID bracelet given to me at the entrance, allowing me to listen to my muddy creation over and over at home. “Others in the genre include Benny Sigler and Gamble and Huff.” Generous comparisons—these were the producers that laid the groundwork for disco, after all—but informative.

Opened on Martin Luther King, Jr. Day in 2021, the 56,000-square-foot NMAAM trades on one very important tenet: you can’t just read about music. To fully understand its influence, music has to be experienced, with perhaps the most technological interactivity outside of science, or children’s museums. The producing booth is one of several: There’s a sound booth where you can rap along to artists like Kendrick Lamar and Nicki Minaj, and challenge a buddy to a rap battle. There’s a booth to create a hip-hop beat. There’s a room with a green screen, where guests perform “Oh Happy Day” with Nashville’s own Dr. Bobby Jones and the Nashville Super Choir. And among artifacts like Whitney Houston’s mink-trimmed jacket, Trina’s jewel-studded boots, and BB King’s Lucille guitar are “Roots and Streams” tables with digital origin maps. Choose an artist like Jay-Z and see a range of his peers (Nas), his influences (Eric B. & Rakim), and who he’s influenced (Ye). Slide your RFID bracelet up to the table to save and create a playlist to listen to at home. The interactives make the learning more visceral.

But it’s not all high tech: Pluck a single-stringed diddley bow to get a feel for the instrument that greatly influenced the sound of the blues. There are also expositions on people and milestones you may not be as familiar with, like Brenda Andrews, the first African American woman to become a partner in a major worldwide music publishing group, and a record from the first Black record company, the jazz and blues Black Swan, which paved the way for Black record labels today.

Plus a whole dance studio, perhaps the first for a museum, where you can follow along to choreography for songs by Motown pioneers The Contours (“Do You Love Me”) and Montell Jordan (“This is How We Do It”). So, yes, I was having fun. Even if my own song kind of sucked. 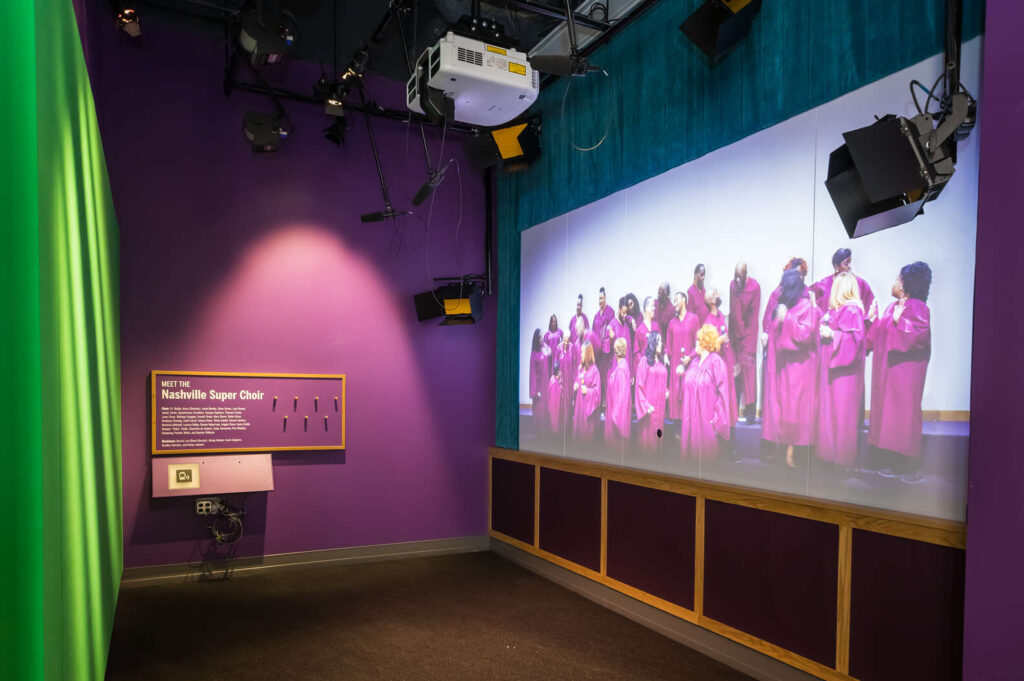 CONTRARY TO CONVENTIONAL KNOWLEDGE, Music City was not nicknamed for country music. As the story goes, when the Fisk Jubilee Singers—the legendary globetrotting HBCU singing group composed of descendents of the enslaved— performed spirituals for Queen Victoria, she was enamored, declaring that they must be from a “city of music.” And that, they were. The choral group are still going strong, celebrating their 150th anniversary last year, with a full schedule of upcoming shows, including Carnegie Hall and Ryman Auditorium. And just by themselves makes Nashville wholly appropriate for a museum on African American music, and its reach.

But there’s more: In the 1920s, Nashville venues hosted blues acts like Bessie Smith and Ethel Waters. The city’s Jefferson Street was in proximity to three HBCUs, and fostered a thriving Black community, with clubs like Club Baron, which brought in acts like Little Richard, Tina Turner, Otis Redding, and Jimi Hendrix. The Opry stage has been visited by James Brown (at the invitation of country star Porter Wagoner), and the Pointer Sisters. While other cities like Memphis and Detroit may seem more poised for a museum focusing on Black music, Nashville is an example of where it all intersected. Which is why the mission of NMAAM— right across the street from the Ryman, and blocks away from honky tonk central—is to “educate the world, preserve the legacy, and celebrate the central role African Americans play in creating the American soundtrack.”