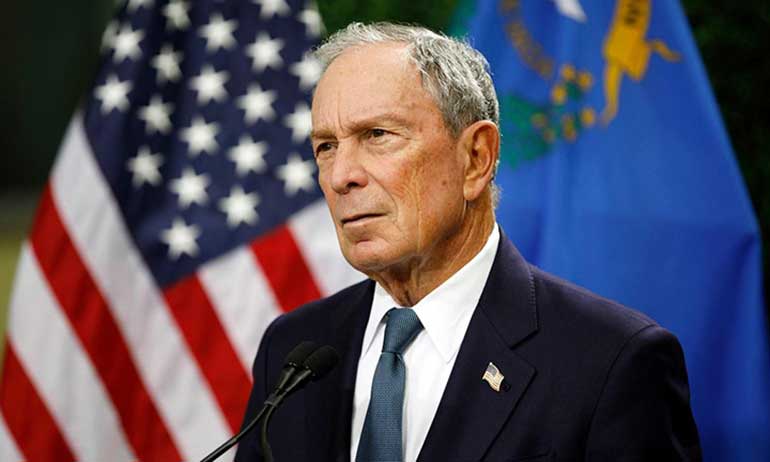 “My problem with Mike Bloomberg is that he is not saying I’m sorry for targeting Black people. I’m sorry for treating Black people as second class citizens. I’m sorry for gaslighting Black people for so long,” said comedian and “Daily Show” host Trevor Noah, reacting to news last week that the presidential candidate made racist and inaccurate comments without showing the slightest hint of remorse as he defended controversial policing tactics he supported while he was mayor of New York City.

“No. He’s just like: I’m sorry that stop and frisk happened to affect Black communities.” Noah went on. “No, it didn’t happen to. You designed it to.”

It has been about a week since Benjamin Dixon, an African-American journalist, released a video of Bloomberg spewing what many commentators have deemed dangerous and misguided language during a 2015 appearance at the Aspen Institute in Colorado.

“Ninety-five percent of your murders — murderers and murder victims — fit one M.O.,” Bloomberg told the audience. “You can just take the description, Xerox it and pass it out to all the cops. They are male, minorities, 16 to 25. That’s true in New York. That’s true in virtually every city.”

“The way you get the guns out of the kids’ hands is to throw them against the wall and frisk them,” he said.

Critics say Bloomberg has still not offered an acceptable apology to African Americans, other minorities or the country as a whole for his hurtful comments.

Bloomberg is also on the record for making similarly offensive racist and classist comments in the past. The Aspen Institute comments are part of a pattern of questionable public statements Bloomberg has made.

“I inherited the police practice of stop-and-frisk, and as part of our effort to stop gun violence it was overused. By the time I left office, I cut it back by 95 percent, but I should’ve done it faster and sooner,” Bloomberg explained his approval of stop and frisk without addressing his comments.

“I regret that and I have apologized — and I have taken responsibility for taking too long to understand the impact it had on Black and Latino communities,” he said.

But critics knock his defense, pointing out that it does not reasonably explain why he popped off so casually about the discriminatory policing policy he championed. It negatively impacted the lives of hundreds of thousands of young Black and Brown men in New York City that were roughed up or processed as criminals over the 12-year period he was mayor.

From the looks of it, Bloomberg and his campaign may have been anticipating that the video would surface as his campaign went on, and that his comments would cause some fallout – especially among Black voters.

The campaign has spent $3.5 million on an ad buy with the National Newspaper Publishers Association (NNPA), a network of over 200 Black-owned newspapers.

The ads will run in 129 newspapers in states like California that hold primaries on Super Tuesday or after.

In addition to Breed, another prominent Californian, Stockton mayor Michael Tubbs, has thrown his support behind Bloomberg.

Bloomberg’s comments were “terrible,” Tubbs admits. But he still went on to justify them, arguing that his candidate’s remarks were “reflective of the dominant ideology that drove our criminal justice policy in this country up until this moment.”

“This is a dangerously disturbing worldview,” tweeted Andrew Gillum, an African-American Democrat who was a candidate in 2018 for governor of Florida, referring to Bloomberg’s statement. “Dangerous for me, my two sons and millions more just like us. Most troubling is that this sounds like a philosophy, not a singular policy.”

On Jan. 24, Tubbs and the Bloomberg campaign hosted an invite-only breakfast discussion in Sacramento to share details of the presidential candidate’s plan to invest $70 billion in low-income neighborhoods across the country.

“Bloomberg’s idea for Black reparations is a drop in the bucket proposal that simply doesn’t go far enough,” said Malaki Amen, chief executive officer of the California Urban Partnership, who attended the event. “Unless his one-time $80B plan becomes an annual investment to repair the economic harm of stop and frisk, redlining and America’s crimes against Black people, I’m going to take a pass.”

Bloomberg’s campaign has been offering payments to prominent African Americans around the country, too.

“Received a call from the Bloomberg campaign last week offering $6,500/mo with benefits for an advisory role on the campaign,” tweeted Elijah Manley, the youngest person to run for a seat in the Florida House of Representatives, last week.

“That’s 100% more than I’m making now,” the 20-year-old African-American politician who supports Sen. Bernie Sanders for president continued. “My answer was of course — No.”

Bloomberg is also standing up his biggest political operation in delegate-rich California, where he plans to make his real campaign debut.

So far, he has launched a television ad campaign in the state costing tens of millions of dollars, has hired 300 full-time campaign staffers, and is deploying an army of young political organizers for his California ground game, some of them in those positions earning as much as $6,000 a month, according to the New York Times.

If Bloomberg performs well in “Super Tuesday” primary in California, he could pick up a sizable share of the more than 400 delegates in the Golden State alone. That would be a big push for him after having avoided a potentially disastrous and campaign-derailing loss in the Democratic primary in South Carolina where the African American vote is a deciding factor — unlike in California.