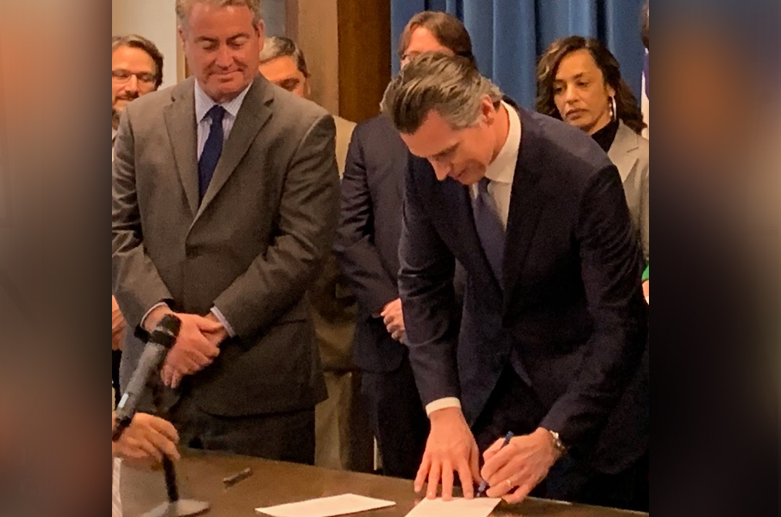 In February, Gov. Newsom asked Tony Thurmond, Superintendent of Public Instruction, to set up a task force charged with looking at the impact public charter school funding has on district-run public school finances.

The team submitted its report to the governor last week.

The10-page document is expected to inform legislators’ votes on two contested charter school bills the Senate is reviewing. Their report could also influence whether or not the governor signs them.

If passed, those bills would encode major changes to California’s Charter Schools Act of 1992. That regulation governs more than 1,300 independent, taxpayer-financed schools in the state, which enroll more than 50,000 African-American students.

“The public deserves a transparent report, one that also reflects honestly that there is more work to be done,” said Thurmond.“We will continue working with legislators and stakeholders, as well as welcome the opportunity for public input.”

The 11-member panel limited the scope of its inquiry to only two issues: charter schools’ impact on the financial health of traditional school districts and inconsistencies in the ways county boards authorize charters.

In the report – heavy with suggestions but light on data – the task force did not quantify the extent to which charter schools impact traditional district school finances. The document also did not share any findings of an inquiry into approval disparities.

Also missing is comment on another issue driving much of the public debate on charter schools in California. That is the huge gap between the academic performance of African-American students and all others sub-groups in the state.

Many charter schools have found themselves on the leading edge of working to close that discrepancy, frequently dubbed “the African-American achievement Gap.” A concentration of charters are located in neighborhoods up and down the state where some of the lowest-performing traditional public schools have operated for decades without making significant improvements to their academic outcomes for Black students. On state tests, the average scores of African-American students consistently fall below those of all other sub-groups, accept students with disabilities.

In 1996, Californians voted to pass Prop 209 prohibiting the state from considering race in public education policy.

Charter school representatives as well as Labor union members supporting traditional district-run schools served on Thurmond’s task force. They teamed up with local school board officials and administrators to hash out ideas to share with the governor.

Their report, submitted ahead of their June 30 deadline, recommends that the state gives school districts more discretion in the authorization process by adding two additional criteria: “saturation” of schools and the “need for new schools.” That “saturation” and “need,” the report says, would factor in the number of schools in a district, the number of students attending them, their performance and curricula.

The report also proposes extending the charter school approval timeframe from 60 to 90 days and limiting the appeal process to county school boards. Under current law, the State Board of Education has the final say.

Finally, the task force recommends changing the state’s education code to allow tuition payments to district-run public schools to continue for one year after students leave traditional public schools for charters. The report puts the cost for that effort at $96 million.

California’s largest concentrations of charter schools operate in clusters around Oakland, Inglewood and San Diego, also home to some of the largest populations of African Americans in California. Therefore, many Black legislators and educators, as well as African-American charter school parents, anticipated the report’s release.

In fact, when the Assembly education committee voted to pass four charter school bills earlier this year, Assemblymember Shirley Weber (D-San Diego), chair of the legislative Black Caucus, withheld her vote. Weber said she was looking forward to seeing the findings of the task force before making a final decision.

“There are correlations. Areas with the most charter schools also happen to be tracts of the state where the census has historically undercounted African Americans. Undercounts result in under-funding for critical services – from education to health,” said Walter Hawkins, a senior research associate at NewHawk, a southern California-based data collection firm. He recently conducted a study commissioned by California Black Media called “Counting Black California.” The report offers a county-by-county breakdown of demographic information on African Americans.

On one side of the charter school debate in California, you have large teacher unions, the NAACP and other public education advocates who have organized and supported protests and strikes – the last major one shut down the LA Unified School District in January. They are demanding more accountability and oversight of charter schools, saying they siphon critical resources away from traditional public schools.

On the other hand, there are concerned parents of more than 600,000 charter school students across the state, charter school operators and other advocates like the National Action Network and the National Urban League. They highlight how the independence of the schools have enabled administrators and teachers to develop specialized curricula that have turned the academic performance around for large numbers of students who district-run public schools previously failed.

In a statement, the California Teachers Association (CTA) praised the majority of the recommendations and urged the legislature to pass the charter school bills currently before them.

“Our marginalized school communities have been deeply impacted when districts are forced to make difficult decisions and lacked the discretion they needed,” said Erika Jones, a Los Angeles-area teacher who represented the CTA on the task force.

The governor’s press office said he is still reviewing the report.

Myrna Castrejón, president and CEO of the California Charter Schools Association, says the task force report is a step forward but there’s more to do.

“There are elements that are deeply concerning and require more work ahead,” she said. “These are polarizing times, and Superintendent Thurmond had the difficult task of pulling together education stakeholders who have passionately disparate views about the vision for California’s public school system.”